A plurality of Americans disagree. 47.7 percent do not equate anti-Zionism with anti-Semitism while 30 percent do. Written responses, (22.3 percent) to the poll were mostly “I don’t know” (6.4 percent) or equivalents (2.2 percent), as respondents grappled and responded to the question with other answers.

Speakers at AIPAC last week claimed 18,000 were in attendance, but the annual gathering took place under a cloud of controversy. AIPAC had to retract and apologize for its Facebook ad campaign claiming U.S. lawmakers supportive of Palestinian human rights were “worse than ISIS.” On February 12 Rep. Betty McCollum (D-MN) released a statement that “hate speech makes AIPAC a hate group.” McCollum hit back at AIPAC’s opposition to her legislation to protect Palestinian children from being “interrogated, abused and even tortured in Israeli military prisons.” Just before the AIPAC conference, McCollum tweeted, “@AIPAC’s agenda: Occupy & annex Palestinian land, Dehumanize Palestinians, Imprison Palestinian Children. Promote Islamophobia.” She did not speak at AIPAC.

Some Israel lobby operatives are stepping up a campaign of false charges of anti-Semitism to shut down prominent individuals that express valid criticism of Israel’s human rights record and ongoing military occupation of lands Israel invaded or annexed through war. Expanding the definition of anti-Semitism to include those who are not adherents of Zionism has taken on new urgency. The Israel lobby is struggling against growing public awareness of Israeli practices and their own politicians’ unconditional support for Israel. Israel lobbyists are campaigning for U.S. government policies designed to suppress both Jewish and non-Jewish voices of those who either strongly self-identify as anti-Zionist or are simply non-Zionist.

Zionism is a political movement that took hold in the late 1800s under the promotion of journalist Theodore Herzl who wanted to create a Jewish nation. After the modern state of Israel was established in 1948, Zionism came to mean support for Israel.

According to the American Council for Judaism, for most of American history, anti-Zionism was the default position of the organized Jewish community. Upon dedicating the first Reform synagogue in Charleston, SC in 1841 Rabbi Gustov Poznanski declared “This happy country is our Palestine, this city our Jerusalem.” In 1885, Reform rabbis meeting in Pittsburgh declared, “We consider ourselves no longer a nation, but a religious community and therefore expect neither to return to Palestine nor a sacrificial worship nor the laws concerning a Jewish state.” Widespread support for a Jewish state in Palestine only began to grow with the rise of anti-Semitism in Russia and Eastern Europe in the early 20th century. Most American Jewish establishment organizations didn’t become Zionist until the rise of Nazism and in the aftermath of the Holocaust. 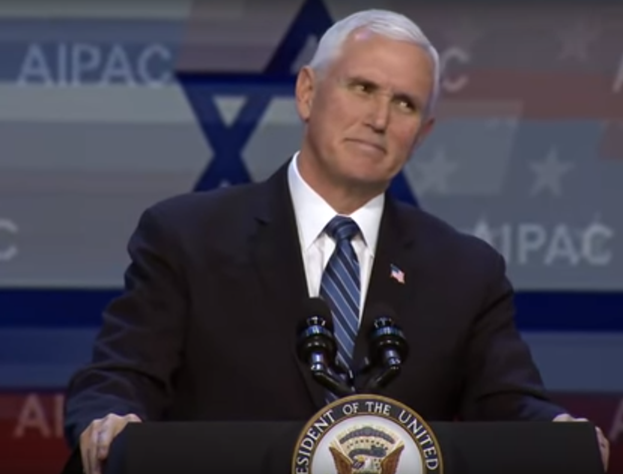 Among the general population of voting age Americans, self-identification with Zionism is weak. A 2017 IRmep poll defined a Zionist as “a person who believes in the development and protection of a Jewish nation in what is now Israel.” 70.3 percent of Americans responded, “I do not consider myself a Zionist.” Majorities of Americans also consistently oppose AIPAC’s signature lobbying demand: massive and unconditional U.S. foreign aid to Israel. That aid, adjusted for inflation, exceeds $250 billion since 1948.

While addressing AIPAC, Pence touted a string of controversial and legally dubious—under international law—actions implemented by what he termed “the most pro-Israel president in history.” Some of the policies—opposed by the American public—were moving the U.S. Embassy from Tel Aviv to Jerusalem (56.5 percent opposed) and the terms of the lopsided Middle East “Deal of the Century” peace plan (68 percent rejection). Americans oppose bans on their free speech rights to boycott Israel (75 percent opposed). They are ambivalent about recently announced U.S. policy that international law does not apply to Israel’s military occupation and colonization of the Golan Heights, West Bank and East Jerusalem. (53.6 percent neither “agree nor disagree”).

Grant F. Smith is the director of the Institute for Research: Middle Eastern Policy in Washington, DC. For more IRmep polls, visit https://IRmep.org/Polls.