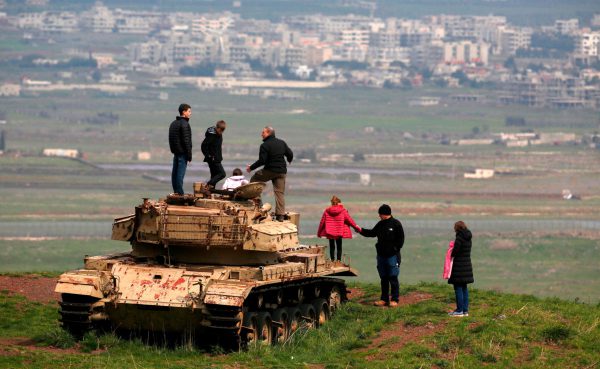 On March 22, 2019, President Donald Trump unceremoniously tweeted that the United States would recognize Israeli sovereignty over the Syrian Golan Heights. He explained that such sovereignty “is of critical strategic and security importance to the State of Israel and regional stability.” Everything about this tweet is wrong – as a matter of law, policy and fact.

The Golan Heights, located in the southwest of Syria, was seized by Israel during the 1967 War when, in the course of six days, Israel also came to control Egypt’s Sinai Peninsula as well as the West Bank and the Gaza Strip. The United Nations, which was in session during the war, deliberated the matter for nearly six months. Controversy revolved around whether Israel should be compelled to withdraw from the Arab territories immediately or whether it could, as the Lyndon B. Johnson administration urged, be able to retain them as consideration in exchange for permanent peace. Despite Syrian and Palestinian opposition, in 1967 the Security Council unanimously passed Resolution 242, which established the land-for-peace framework sought by the United States and Israel that declared that the territories would be returned in exchange for permanent peace.

The Resolution proved ineffective due to a lack of political will to establish peace together with Israel’s desire to retain the territories. The Israeli government developed this legal argument: Because no sovereign existed in the West Bank and Gaza – Egypt and Jordan never had legitimate title and Palestinians were not sovereigns – no country could claim better title to the territory than could Israel. Thus, Israeli officials argued, the West Bank and Gaza could not be occupied as a matter of law and are better described as “disputed” rather than occupied territories. This novel legal argument enabled Israel to establish legal presence as a military authority in the Palestinian territory adhering strictly to Occupation Law, most notably its proscription on civilian settlement. This enabled Israel to fulfill its settler-colonial territorial ambitions by incrementally taking Palestinian lands under the framework of military necessity without the Palestinian people on them.

Unlike the Palestinian territories, the Sinai Peninsula and the Golan Heights were never disputed as no one questioned Egyptian and Syrian sovereignty, respectively. Still, even there, Israel refused to recognize the territory as occupied as a matter of law. The framework established by UNSC Resolution 242 proved untenable and in October 1973, Egypt and Syria launched a surprise attack on Israel in the hopes of recouping their territories. While Israel ultimately prevailed in the war, Egypt and Syria won psychologically. Their victory compelled the passage of Security Council Resolution 338, which established a ceasefire and catalyzed a U.S.-led Middle East Peace Process to return the Arab territories for peace. Palestinians would not be recognized as legitimate representatives to negotiate the return of the West Bank and Gaza until 1991 and Syria continued to object to the terms of negotiations, which legitimated Israel’s defensive claims in the region and prioritized its rejection of Palestinian sovereignty.

In 1979, Israel and Egypt, the largest Arab country, agreed to the Camp David Accords, which facilitated the return of the Sinai to Egypt and normalized Egyptian-Israeli relations. Significantly, the Accords signaled that no Arab army would wage a conventional war against Israel as Egypt had established permanent peace and Syria would not go to war alone. Two years later, in 1981, Israel unilaterally annexed the Golan Heights. The Ronald Reagan administration rebuked Israel’s annexation and declared it “null and void,” not least because it violates the international principle prohibiting the acquisition of territory by force. Since the early 1990s, Israel and Syria have engaged in several peace talks over the Golan Heights but they have each crumbled over Israel’s refusal to return to the 1967 lines. Doing so would mean relinquishing Israel’s access to a key water source in the Sea of Galilee, which provides the country with one-third of its fresh water supply.

The Trump administration, together with Israel, has claimed that the Golan Heights serve a security interest, but that is plainly untrue. Israel has established 34 settlements in the Golan Heights and settled nearly 20,000 Israeli civilians. If indeed the territory is a defensive buffer against Syrian attack, then Israel is using its own civilian population as a human shield. And if it is safe for the civilians to live there, then it is not a defensive buffer. More, Israel maintains nearly 167 businesses in the Golan Heights, including the only ski resort available to Israelis. Additionally, Jordan established permanent peace with Israel in 1994 and so, along with Egypt, poses no military threat; Syria has not waged war since 1973; and the two other countries that have historically threatened Israel — Libya and Iraq — have both been decimated in U.S.-led or supported wars. Hezbollah, whom Israel claims is a proxy military force for Iran, has not even initiated war from Lebanon, where it is based, even after the withdrawal of Israeli forces from southern Lebanon in 2000. The one large-scale war since then was initiated by Israel after Hezbollah conducted a cross-border raid to capture three Israeli soldiers it intended to exchange for Hezbollah prisoners of war. There is no credible military threat to Israel from Syria’s southern border.

The primary reason for the U.S. announcement is domestic: Trump is speaking to his evangelical base, which covets Israel as a matter of prophecy and ideology. American Evangelicals consider the in-gathering of a global Jewry in Israel as the prerequisite element to beget Armageddon and the return of Christ. Ideologically, they consider Israel as the eastern-most front in the U.S.’s so-called war on terror stemming not only attacks but, perhaps more significantly, the migration of Muslims to the West.

Trump’s announcement at the height of a tense campaign signals that a vote for Netanyahu is a vote for strongman Trump, who disdains international law and diplomacy in favor of a policy of “might makes right.”

The announcement is a boon for Israeli Prime Minister Benjamin Netanyahu, who is mired in fraud and corruption allegations only three weeks ahead of Israeli elections. Trump’s announcement serves as an effective deflection from his domestic problems and tells a center-right Israeli base that voting for him means fulfilling Israel’s territorial ambitions. Israeli society considers the Golan Heights to be part of Israel. Trump’s announcement at the height of a tense campaign signals that a vote for Netanyahu is a vote for strongman Trump, who disdains international law and diplomacy in favor of a policy of “might makes right.”

The effect of Trump’s announcement is contingent upon the international response. Trump certainly has the executive authority to recognize the Golan Heights as part of Israel’s sovereignty, even in contravention of international law, but U.S. recognition is not tantamount to a shift in the territory’s status quo. So far there has been broad denunciation of the U.S.’s announcement, from the United Nations and among several states including Egypt and Russia. While that condemnation is welcome, it is also not enough. It is crucial that the international community demonstrate its opposition in the form of more coercive sanctions, but such a response is unlikely if the tacit acceptance of the U.S.’s embassy move to Jerusalem is any indication.Indeed, in May 2017, the Trump administration moved its embassy from Tel Aviv to Jerusalem in similar contravention of Security Council Resolution 242, disregarding the principle prohibiting the acquisition of territory by force. Although 128 countries condemned the U.S. move in a UN resolution, and few other countries followed suit and moved their embassies, Israel has faced no consequences for its ongoing settlement of East Jerusalem and the ethnic cleansing of its Palestinian inhabitants. In fact, Secretary of State Mike Pompeo visited the Western Wall in East Jerusalem last week – the first for a U.S. official — reifying the U.S.’s policy shift in a similar bid to support Netanyahu’s reelection campaign.

This abysmal situation underscores the urgency of a global boycott, divestment and sanctions movement against Israel, which at least since 2005 has been a grassroots effort to overcome diplomatic intransigence. We must remember that this is not just about Israel but also about the U.S.’s imperial wars in the Middle East, its attack on internationalism (i.e., threats against the International Criminal Court and pulling out of the Paris Climate Protocol) as well as its ongoing structural violence against minorities, Indigenous nations, refugees and women in the United States. Israel is part of a broader constellation constituting U.S. interests the world over.

Trump’s Golan Heights announcement is not just a threat to the Middle East — it’s a threat to the whole world because it reifies policies of racial supremacy and fascism. The response to it should be similarly global among people who oppose these violent trends in their communities and across the world.